Before the training of hands can arise a question, but what is better to work at the beginning, biceps or triceps, in order to achieve maximum effect? Here we must immediately identify the border, there are complexes in which the biceps and triceps are trained separately (on different days), after the back or deltas with the chest. There, the process is somewhat different, because, for example, after exercising on the back, the biceps are significantly fatigued and then they no longer need intensive work to get a stimulus for growth, just two or three exercises. The same story with triceps after the chest or deltas. But when the muscles of the training of hands meet in a single training, the order of priority can affect the overall result.

Li Labrada – press down on the block The choice of exercises is determined by the presence of a lag in the development of a particular group of muscles and hands are no exception in this scheme. Training should focus primarily on what is not developed the way you want, and since it is at the beginning of the training that you are most full of energy, then you should work out the lagging muscle group at the beginning. Only in this way will it get a really high-quality load. If the biceps and triceps evolve approximately the same, then the optimal option is to periodically change their order in the complex. For example, two weeks the first number goes biceps, then the next two weeks the first number goes triceps. Thus, the muscles will be worked out evenly. A relatively short cycle in two weeks is spent because on average the muscles begin to adapt to physical stresses through two trainings to the third and if you train your training of hands once a week, then the third week should be changed in order to shock the muscles and not let them get used to work.

After a certain period of time, you may notice an accelerated development of the biceps or triceps. In this case, it is necessary to switch to the lagging Big Rami – to climb the biceps of the rope handle of the lower block for 1-2 months and to apply the shock technique, systematically changing the exercises of the target muscle, but to perform it at the beginning. This method will return proportions and a balanced look. When the hands are pumped after the back or chest, performing the first biceps (after the back) or triceps (after the chest) will be more difficult, since they are already preloaded, so the amount of exercise for them can be reduced. If the hands are withdrawn on a separate day, the training should be powerful and intense for both the biceps and triceps, with the only difference that some group starts the program.

Next is a high-intensity complex for the muscles of the hands with a bias for biceps (rest between sets 60-90 seconds, between groups of muscles – 2-3 minutes): 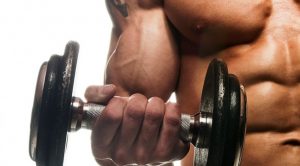 Note: to place emphasis on triceps, the order of execution changes in places.