Oxandrolone is a synthetic derivative of dihydrotestosterone, in which the second carbon atom is substituted by kistoroda. Anavar is widely known for its extremely low androgenic activity on a par with high anabolic index.

Initially, oxandrolone has been developed for the treatment of debilitated HIV-infected patients with Turner syndrome, anemia, to recover from burns, strengthen bones, but soon it began to actively use in bodybuilding, then Oxan was listed as a controlled substance.

The effects of oxandrolone

Anavar is inappropriate to use for a set of muscle mass. Anavar course is recommended for people who have sufficient muscle and a moderate fat content in the body to give relief of muscles and fat reduction.

Side effects of oxandrolone

Despite the fact that Anavar is an alpha-17-alkylated steroid of its toxic effect on the liver slightly. Studies show that Anavar 20 mg per day, taken for 12 weeks did not affect the level of liver enzymes (liver failure indicators). The first signs of liver damage is a pain in the right upper quadrant, light stools and dark urine.

Since Anavar is a derivative of dihydrotestosterone, it does not aromatize (not converted into estrogen, which cause side effects such as gynecomastia and fluid accumulation in the body). 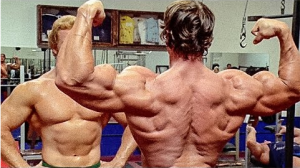 Oxandrolone aka anavar is prefered by those individuals who are willing to gain gradually and with little to none side effects.

Oxandrolone has no significant effect on the level of natural testosterone production in moderate doses (does not inhibit the hypothalamic-pituitary-testes feedback mechanism axis). When the dosage of Anavar is high, the body reacts to a decrease in gonadotropin production, suggesting that endogenous testosterone level is too high. Lack of stimulation of Leydig cells leads to testicular atrophy. Oxan is used in a dose of 80 mg per day suppresses testosterone levels after 12 weeks of 67%

Suppression of testosterone production appears sluggish decline in libido and erectile dysfunction. Fix the side-effect of oxandrolone possible by the addition of gonadotropin in the course or conduct courses combined with androgen drugs. Read more

Also, sometimes there are side effects of Anavar as loss of appetite, abdominal pain, nausea, headaches, rise in blood pressure and others.

In general, the side effects of Anavar are rare, Anavar is one of the safest steroids.

In order to prevent some of the side effects of oxandrolone (decreased libido, erection sluggish, toxic effects on the liver) and the accompanying side effects of drugs, and also to get great results, it is recommended to include in the course of Anavar vysokoandrogennye drugs: